Robert Boyle is father of Chemistry, William Faithorne's engraved portrait of Boyle, with his air-pump in the background, 1664 (Sutherland Collection, Ashmolean Museum, Oxford). We here show the entire plate from which the central oval appears on the homepage, including the ornamental surround and pedestal inscribed with Boyle's name. 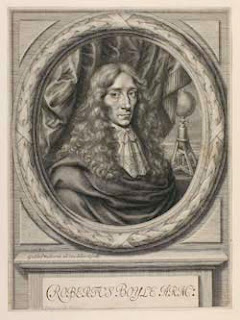 Robert Boyle was one of the most significant of British scientists. More than anyone else, he invented the modern experimental method. His profuse published findings on pneumatics, chemistry and many other scientific topics were widely influential in providing empirical support for a mechanical view of nature. He also wrote books on the philosophical aspects of science, and on religion. He was a founding member of the Royal Society, and was the doyen of that body in its formative years.

Boyle was born on 27 January 1627, youngest son of Richard Boyle, 1st Earl of Cork by his second wife, Catherine. After spending two years at Eton, he travelled on the continent and received further education in Geneva from a Huguenot intellectual, Isaac Marcombes. In 1644 he returned to England and settled at Stalbridge in Dorset, where his career as an author began. At this point, his writings were on moral and literary topics rather than scientific ones, but in 1649 he ‘discovered' experimental science, and this was to dominate his entire subsequent career, in conjunction with an overriding religious commitment. From the early 1650s, he began to write treatises on scientific topics and to carry out experiments. This activity accelerated and became more focused following his move to Oxford in 1655-6 to join the group of group of natural philosophers there, and the late 1650s saw an intense burst of activity on Boyle's part, including such classic experiments as that illustrating the redintegration of saltpetre, or (in 1658-9) the series using an air-pump or vacuum chamber. At this point, hardly any of his writings were published, but from 1659 onwards he began to publish profusely, and a string of publications continued for the rest of his life, covering natural philosophy, medicine and religion. In 1668 he moved to London, where he lived at the house of his sister, Lady Ranelagh, experimenting, accumulating information and writing, until his death a week after hers in December 1691.