A Fortune Given Away 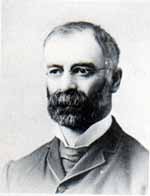 This is the story of a tall man with snow-white hair and a merry laugh. If you had met him, you would probably have noticed first his merry laugh. His name was Stephen M. Babcock.

Once butter was made only on farms. Then it did not matter whether milk was tested or not. But after the cream separator came into use, butter was made in factories. Then it was necessary to know how rich a farmer's milk was so that he could be paid fairly. Jersey and Guernsey cows give much richer milk than Holsteins do. On the other hand, Holstein cows produce more milk than either of the other two breeds. Milks mixed and paid for by weight didn't give a "square deal" to farmers selling very rich milk. Besides, some dishonest farmers skimmed off part of the cream. Some even put water into the milk.


In 1889 there was only one way to tell the true value of milk. That way cost too much money and took too much time. Besides, it could not be used on the farm or in the ordinary factory.

William A. Henry, dean of the University's College of Agriculture, asked Stephen Babcock to try to work out a cheaper way to measure the amount of butterfat in milk. Dr. Babcock worked on the problem, and at last he had a test that seemed to work. At any rate, it worked on all the cows in the University herd except one. When Dr. Babcock made his test on Sylvia, a Jersey cow of good size, it did not check with the other, more expensive test, as it should have done.

Dr. Babcock's friends urged him to give out his test anyway. They said, "There are thirty cows in the herd, and your test worked with all except one of them. Surely that is good enough."

But Dr. Babcock said, "No test is going out with my name on it unless it is perfect." He worked weeks more on the problem. Then one day he burst into Dean Henry's office carrying a test tube. "Well, I have it at last," he said.

The Babcock Test is so simple that it can be used by any careful person, and it is inexpensive to operate. From the very beginning it was so complete in every detail that no change has had to be made in it. []
source