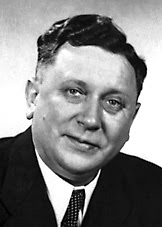 Kurt Alder was born in Königshütte, Upper Silesia, on the 10th of July 1902. His childhood and school years were spent in these industrial surroundings, but after the end of the First World War he was forced to leave his home, due to political circumstances.

He started reading chemistry at Berlin University in 1922, and later continued these studies at Kiel, where he obtained his degree of Ph.D. in 1926. The thesis for the doctorate, on which Alder worked under O. Diels, was entitled: Über die Ursachen der Azoester-reaktion (On the causes of the azoester reaction).

In 1930 Alder was appointed reader for chemistry by the Faculty of Philosophy at Kiel University; promotion to lecturer followed in 1934. Alder left Kiel in 1936 to take up the appointment as head of department in the science laboratories of the I. G. Farben-Industrie, at their works in Leverkusen, where he worked on the preparation and constitution of synthetic rubber ("Buna"). By this work some of his earlier interests were reawakened and stimulated.

In 1940 Alder was appointed to the Chair for Experimental Chemistry and Chemical Technology at Cologne University and also became Principal of the Institute of Chemistry. He received invitations from Berlin University in 1944 and from the University of Marburg in 1950, but declined both.

As early as 1927-1928, whilst at Kiel, Alder had studied problems of systematic organic chemistry in collaboration with his teacher O. Diels, and this lead to their joint discovery of the principle of the diene-synthesis, which they investigated and determined in all its aspects. At the same time Alder also worked in collaboration with younger colleagues on extensive stereochemical investigations, prompted by selection phenomena during organic chemical reactions, particularly in unsaturated systems. A series of other problems, such as the behaviour of double bonds in stressed carbon rings and the phenomena of intermolecular rearrangements, were investigated.

Although conditions in Cologne during the 1940's were not favourable for scientific research, Alder was nevertheless able to continue his original work systematically and even discover relationships which were decisive for future developments. These are characterized by the transition from pure additive processes, of which the diene-synthesis is the most important, to processes of substitution. The purpose of these investigations was the analysis and the elimination of the dualism existing between addition and substitution. These studies covered a wide field and include also the reaction of molecular oxygen on unsaturated substrates.

Kurt Alder's investigations have been described in about 150 papers, which were published mainly in Justus Liebig's Annalen der Chemie, in the Berichte der Deutschen Chemischen Gesellschaft and in Angewandte Chemie.

In recognition of his work, Alder received the Emil Fischer Memorial Medal from the Association of German Chemists, in 1938. In the same year he became a member of the Kaiserlich Leopold.-Karol.-Deutsche Akademie der Naturforscher (Imperial Leopold.-Karol.-German Academy of Natural Philosophers) in Halle. The Medical Faculty of the University of Cologne conferred the honorary degree of M.D. on Alder in 1950, and in 1954 he received the honorary doctorate of the University of Salamanca. []
Source